General Information About The Nemesis Wreck In Pernera Cyprus

General information about The Nemesis wreck 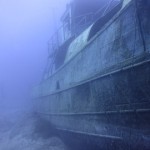 The Nemesis was the second of the Wrecks to be sunk in the Protaras and Ayia Napa area. Sitting just off from the Golden coast Hotel and fishing harbour and in front of the Atlantica Sea Breeze (Kouzalis Beach Hotel)

The wreck so sunk in December 2013 in front of a large excited crowd that had gathered to see the ship go down even the TV crews were there to watch this spectacle. With the sinking of The Liberty under a cloud The sinking of The Nemesis was done in a more professional way. 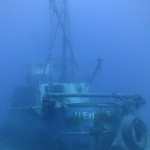 The Nemesis Wreck sits in 24m of water and is 25m long and 6m wide the wreck was purposely sunk so she sits upright on the seabed. Before the wreck found her final resting place at the bottom of the Mediterranean Sea there were holes cut into the wreck and even one of the engines was left in which makes some great swim throughs a lot of thought went into the sinking of the Nemesis and it is proving to be a very popular wreck. 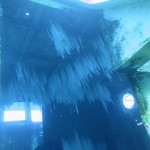 The same as The Liberty the first of the Marine life to find a home on the wreck was the Squid and again they laid there eggs in the thousands and thousands. Also a Moray eel found the wreck and made it its home other marine life we see on the wreck are Tuna and we have a big shoal of Amber Jacks living around the wreck so with the sea bream and damsel fish, rainbow wrasse, groupers  and much more makes the Nemesis a great dive.

Courses that can be taken on the Nemesis wreck include:

Two wrecks in one dive with The Cyprus Diving Centre

The Nemesis was sunk just a couple of hundred meters away from The Liberty and The Cyprus Diving Centre was the first dive centre to combine both wrecks in one dive. 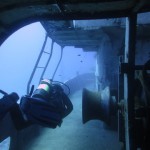 The first part of the dive is on The Liberty so we drop down the mooring line onto the wreck we swim through the doorway and then down into the wreck to make the first of our swim throughs. Once we have swam the length of the wreck we have 2 choices. Just behind The Liberty a 2m stainless steal cross was laid so this is interesting to go and see before making our way over to The Nemesis (this is good for diving on Nitrox and for those that are good with air consumption) or we can turn to the left after we reach the end of The Liberty and make our way over to The Nemesis on route between the wrecks there is a possibility to meet our resident Turtle or some of the beautiful flying gurnards can be spotted on the seabed. Also keep your eyes on the distance as we make our way over The Nemesis looms out of the gloom and its impressive bow greets us.

Once its time to make our way to our safety stop keep an eye into the blue as this is when the Jacks and Tuna come see what is going on.

To book your dive on the Nemesis or to book a dive package including both wrecks email us.

All divers welcome to join us at the Cyprus Diving Centre. Interesting topics to discuss ;)

The Cyprus Diving Centre has been cleaning beaches of Cyprus for more then 10 years. Because we do care!